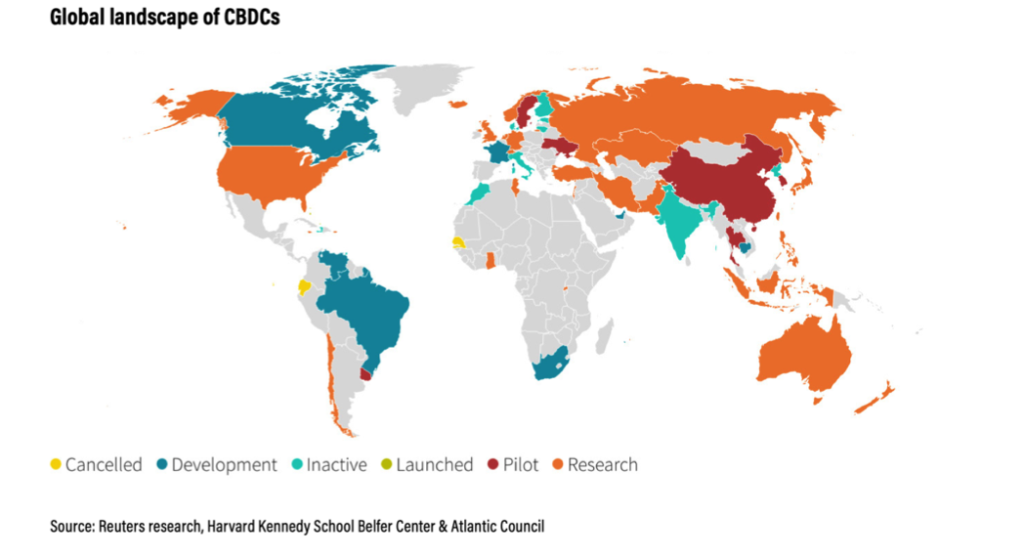 What is a Central Bank Digital Currency – CDBC?

Central Bank Digital Currency (CDBC) is a digital currency proposed and issued by the central bank of a sovereign country. While the concept of CBDCs was inspired by cryptos, the ethos of CBDCs show a stark contrast from the ethos of cryptocurrencies in that they are issued by the state as a centralized form of digital money. Although CBDCs are using blockchain technology, this centralized form of digital money makes them very different from cryptocurrencies;

Central banks, commercial banks, and Governments have taken interest in the idea of CBDCs not only with the rise of bitcoin, but following Facebook's digital Diem effort. They probably felt the risk that with a company having 3 billions customers, i.e. half of the world population, they could be "out of business", should all those people start using this new currency. For sure, the commercial power of Facebook, and its focus on extremely simple User eXperience (UX) are compelling arguments to fear a massive usage of DIEM.

So, by end of 2021, over 60 central banks are working on CBDC programs. Many CBDCs still remain in the research & development stage. Some countries are beginning to pilot CBDC programs as shown on the above picture.

According to a survey by the Bank of International Settlements (BIS), central banks estimate it was possible to issue a general purpose CBDC in the “short- or medium-term.”

How many types of CDBCs exist?

CBDCs are generally broken down in two different segments: retail and wholesale.

The difference between the two categories lies in potential usage. Retail CBDCs, or general purpose CBDCs, refer to digitized fiat money that will be used as a mode of payment or legal tender for wider retail transactions by a broader group of people, like citizens and corporations.

Wholesale CBDCs are for restricted groups. Such as financial institutions that hold reserves with a central bank and are designed to facilitate payments and settlement transactions. The purpose of wholesale CBDCs is to facilitate efficient value transfer between a sender and a receiver without the need for intermediaries. Billions of savings are at stake for Central Banks, which is the very first driver for wholesale CBDCs experiments.

Although the utility of CBDCs and their impact on societies and governance has yet to be seen, some researchers believe the global rise of CBDCs has begun.

Given the properties of digital currencies, CBDCs could be useful in any direct financial transfers from central banks to individuals or businesses. Retail CBDCs are thus seen by Central Bank as a great technical tool, to distribute money to citizens/enterprises, in order to sustain economic activity.

Blockchain technology, with peer to peer transactions, allows for efficient distribution of money, as opposed to costly “helicopter” distribution, and eventually control of the usage of this money.

In Europe, money production falls into the objective of ECB as stated on its website:

“Our main aim is to maintain price stability, i.e. to safeguard the value of the euro. Price stability is essential for economic growth and job creation – two of the European Union’s objectives – and it represents the most important contribution monetary policy can make in that area.”

Yet, with current monetary tools, helicopter money distribution is not performed by ECB. Indeed, ECB does emit new money to support economic activity, and distribute this money through the purchase of securities. Following the COVID-19 outbreak in early 2020, ECB ran a Pandemic Emergency Purchase Program (PEPP) to support the European economy.  The PEPP is a temporary asset purchase programme of private and public sector securities. ECB Governing Council decided to increase the initial €750 billion envelope for the PEPP by €600 billion on 4 June 2020 and by €500 billion on 10 December, for a new total of €1,850 billion. All asset categories eligible under the existing asset purchase programme (APP) are also eligible under the PEPP, as well as a waiver of the eligibility requirements has been granted for securities issued by the Greek Government.

ECB publishes PEPP purchases bimonthly data. According to its February 2021 publication, as of the end of January 2021, 95% of total net purchases are in public sector bonds (up from 93%), with 3% in corporate bonds, and 2% in commercial paper. Consequently at 95%, the distribution of this money is performed by Government, thus by political decision makers, also allowing for variations within different European Member States. This separation of political power from monetary power, falls into the Treaty on the Functioning of the European Union.

In other juridictions, CBDCs could be useful in any direct financial transfers from governments to individuals or businesses. Domestically, the government could use CBDCs as an economic-policy tool, where stimulus can be directly delivered to individuals. With CBDCs, central banks can assume the role of a provider and act on behalf of the government to provide funds, which would theoretically give the central bank greater and quicker control over economic activity stabilization, especially in times of financial crises. Because CBDCs would theoretically reach anyone with an e-wallet, it would allow for an efficient and widespread transfer of money even to those who may have historically been unable to benefit from such payments or who have not been able participate in the traditional banking system.

With greater transparency in payments, central banks would aid governments in providing targeted relief to selected areas or people groups.

Direct payment using CBDCs could also resolve some of the current existing inefficiencies with emergency payments or stimulus checks from governments. As we witnessed in 2020 amid the pandemic, emergency funding from governments was mostly inefficient, slow, or impractical.

For example, in March 2020, the US announced its first round of stimulus checks worth $1,200 or less to those unemployed or struggling due to the COVID-19 pandemic. However, despite the promised 3 week roll-out for direct deposits, not all 150M eligible Americans had received their checks, with delay in payments caused due to: (1) outdated bank information causing the IRS to deposit checks into closed bank accounts; (2) lack of direct deposit information hindering the use of direct deposits and rerouting to paper checks; (3) or constraints in payments systems that only operate during business hours and take couple of business days to credit accounts, among other reasons. The Brookings Institute estimated 70M people living paycheck to paycheck in the United States would have to wait a few months to receive their stimulus checks, thereby causing the most vulnerable to resort to expensive alternatives to access funds.

By November 2020, eight months after the emergency funds were approved, many had still not received their stimulus checks. With the usage of CBDCs, we can imagine a far more efficient and responsive process where economic activity is stabilized by direct transfer of money from central banks to qualifying individuals.

The Pandemic case, that spreads the fear to die, is a compeling case for a Central Bank to print helicopter money (the European Union also agreed for the first time to emit an European Bond, the Corona Bond). Should a European Member State decides to fight homless poverty, or a specific militar/nuclear program, would ECB accept to buy a government bond denominated in CBDC, dedicated at this specific country’s objective ? If the answer is yes, CBDC becomes not a new currency, or a new monetary policy tools, but a strong use case of a blockchain technology to distribute efficiently government money.

Eventually, the government can decide to control the usage to the distributed money : the CBDC can not be used to buy alcohool, nor tobacco, but only “healthy food”. Here again, the decision of the usage of the money should stay in the control of Governments, not Central Banks.

If successfully created, issued, and widely utilized, CBDCs could provide governments the ability to track or trace transactions effectively and provide real-time updates of economic activity within a given jurisdiction; payment systems could also operate seamlessly and efficiently while offering near-instant settlements at lower costs. Both of which are too appealing for central banks to ignore.

CBDC Usage: confusion between currency and mean of payment

Are CBDCs a currency, or a mean of payments? Or both ?

In the 2020 BIS (Bank of International Settlements) paper « Central bank digital currencies: foundational principles and core features », for the central banks contributing to this report, the common motivation for exploring a general purpose CBDC is its use as a means of payment.

In its Paper 114 the BIS defines CBDC

“as a central bank-issued digital money denominated in the national unit of account, and representing a liability of the central bank. If the CBDC is intended to be a digital equivalent of cash for use by end users (households and businesses), it is referred to as a “general purpose” or “retail” CBDC. As such, it offers a new option to the general public for holding money. CBDC is different from cash, as it comes in a digital form unlike physical coins and banknotes.

CBDC is also different from existing forms of cashless payment instruments for consumers such as credit transfers, direct debits, card payments and e-money, as it represents a direct claim on a central bank, rather than a liability of a private financial institution. This type of riskless claim also makes CBDC different from cryptocurrencies (such as Bitcoin) or other private digital tokens (eg so-called stablecoins such as Tether).”

There is a confusion between the currency, defined as the national unit of account and, means of payments (payment instruments) that are means to transfer units of account from one wallet to an other (such as checks, payment cards, transfers, …).

The technology used by the payment instrument is independent of the currency transferred. Central Banks could well decide to transfer money to Governments and then to citizen with current payment systems.

Indeed, when paying with a payment card, or with wires, the technology used allows to transfer some units of account (euros, dollars,..) from one account (consumer account) to an other (the merchant account). The owner of the technology charges fees for this services, but the technology is not linked to the unit of account.

The anticipated benefits of CBDCs is to link the payment system with the currency. In particular, this would allow the distribution of helicopter money issued by central banks to targeted population. However, assuming the economic and monetary policies are aligned, the total cost of existing payment tools such as transfers compared to the total cost of Central Banks privately owned blockchain has not yet been performed.

CBDC Usage: the case of the green-euro

There is no one rule for the adoption of a currency by economic agents. For sure, for Governments and financial institutions to be in competition with large private corporations is a new unpleasant situation. Will they be "uberized" as well ?

One way for Governments and financial institutions to stay in the game is to cope with population's demand. In the case of Europe, Climate Change is the very first priority of the European Commission.

Therefore, building a third form of the euro, complementary to the two existing forms (cash and scriptural), backed with CO2 reduction, would be a positive monetary innovation. We call this new form a the euro, a green-euro. The more we use it, the more likely Central Banks and Governments could consider it as a strong Central Bank Digital Currency use case. All CO2 reductions could be stored on a blockchain to guarantee the uniqueness of green-euro issuance, and thus financial stability around this new form of the euro.

The introduction of a green-euro as a CBDC to address the European green deal has the potential to revolutionalize European’s life. It would:

Join us in the fight against climate change with green-euros, and open your CO2 account!